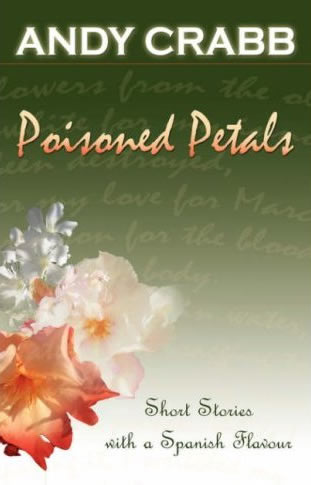 Spain and its varied people provide the setting and characters for Andy Crabb’s new collection of short stories. He has taken a kaleidoscopic journey through history and has painted word pictures of many of the places that the reader will know.
The stories are arranged in chronological order, starting with a colourful pair of tales concerning two very different Iberian men. A thousand years later, a very worried and harassed Roman legionary demands food from a lonely village with surprising and horrifying results. A beautiful Moorish girl is the centre of an intriguing love story, and in another tale a rogue Templar knight attacks a peace-loving family but comes to a sticky end.

The remainder of the stories are set in the present day, and are filled with the people we so easily recognise; the petty thief, the teenage shopper, a deranged farmer, an unrequited lover, a nude sun-bather, a drunken lout in a rubbish container, a carpet seller, an arsonist, two Flamenco singers, a cheating husband, a terrorist bomber, a football hooligan, different nationalities at loggerheads, a stubborn donkey, a racist, a golf professional, an overweight teenager and her widowed father who renovate an old castle, an old lady with a secret love, a dishonest salesman, people in bad weather, a cowardly bull, a handicapped violinist and a disfigured tenor, an old invalid who refuses to give up, a brave rat, con-men, a teacher, a vengeful husband, an intolerant retired English Army captain with only two words of Spanish, a priest who takes exception to nude statues, a dog who mercifully ends his master’s life, the villagers of the submerged village of Portomarín, a member of an earthquake rescue team, a mute boy who meats a deaf girl, a dreadful driver, Christmas shoppers, and an old, bearded biker.

Spain’s varied scenery, from its coastal plains and beaches to its high sierras, have provided fitting backdrops for the stories. The massif of El Montgó is where the mighty hunter, Ixenus, wails at night, the Camino de Santiago is featured in two other stories, and “El Gorrero – The Man in the Cap”, takes place in the Alpujarras near Granada. All the other stories are set in airports, in supermarkets, in luxurious villas, in small white villages, in Torremolinos, Benissa, Dénia, Madrid, the Comunidad Valenciana, Nueva Andalucia near Puerto Banús, Churriana, Barcelona and Sagunto, in classrooms and hospitals, in department stores and at the peaje.

Some of the stories contain flashes of humour, others are light and airy and will carry the readers to mountain tops of thyme and rosemary. Five of the stories are written for those people who are moved by love or tragedy, and the remainder form a mixture of light and dark and a fair proportion of revenge.

The author has a vivid imagination and has gleaned ideas from various sources. He takes newspaper clippings, snippets from conversations, odd situations, stirs in a measure of Spanish flavour and a lot of his individual style. The result? “Poisoned Petals”.

A Taster Story from the Book